2) Create fun ways to rotate jobs, such as a job wheel with a spinner, job charts, or a job jar for “fishing” out two chores for the week.

3) Take time for job training — do chores with them the first six years.

4) Discuss all problems at a family meeting and focus on solutions. 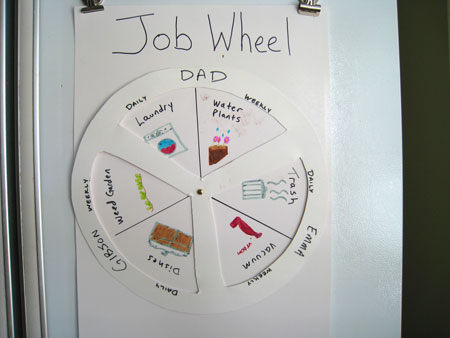 Today I got the kids involved in creating a Job Wheel. Gibson created the wheel and Emma colored the pictures. We decided to have a daily job and a weekly job which will rotate every week. Some of the jobs will be easy for the kids, such as taking out the trash and watering the plants. Other jobs will require training. I have to admit that I am a little worried about the laundry job. I have visions of all my long-sleeve shirts shrinking to my forearm, and don't get me started on what will happen the first time they wash a pair of pants with a half empty bag of skittles in the pocket. YIKES!!!

I think we can all agree that it is important to teach kids the value of work. Contributing to the family will instill a sense of purpose and belonging for children. But let’s face it—when kids help out, it sometimes creates more work for parents!

For example, feeding the dog is one of the chores in our household. It would take me all of thirty seconds to feed the dog, but I’m trying to find ways for my children to contribute. So Emma had the chore of feeding the dog one week. The dog food is in the garage, which meant my daughter had to navigate two doors in the process of feeding the dog. First she scooped a cup full of dog food and spilled half of it on the garage floor. Then she spilled some more while opening the door to the laundry room. Then she spilled even more while opening the door to the backyard. And then again while pouring the dog food into Gracie’s dish.

So now instead of just having a dog to feed, I have ants in the garage and a mess to clean up in the laundry room. Not to mention a very thin dog who only receives a small portion of the original cup of dog food.

It is always with a bit of anxiety that I venture into the kitchen to spin the job wheel.

The examples above are why we need to remember that this is not something that will be mastered in one week. Jobs are an ongoing process that probably needs to be addressed at every family meeting. So let's be patient with our children as we introduce this concept.  Be sure and utilize the Small Steps tool card and if you have the deck of tool cards or the tool cards app, you may want to skip ahead and take a peak at the "Take Time for Training" tool card.

We have had our "Job Wheel" on the refrigerator for several weeks now and I am starting to see some positive results. The kids still hate doing the dishes, but I started listening to their complaints and implemented some of their ideas. For example, my son was complaining one day and he said "Why doesn't everybody just put their dishes in the dishwasher after they use them?" That was a very good point and so we are starting a new rule in our house of putting your dirty dishes in the dishwasher.

Next I heard my daughter complaining that the dish washing gloves were too big and water kept getting inside them. So the next time we were at the store, I had her pick out some gloves that would fit her. She chose a lovely pair of small, pink dish washing gloves. Now I think she actually looks forward to doing the dishes because she gets to use her new gloves!

There is still some resistance and passive aggressive behavior when it comes to the chores. For example, my son's job this week is laundry. He had a sleepover one night and I needed some clothes washed, so I started a load of laundry for him. When he got home from his sleepover I mentioned that I had started a load of laundry and I asked him if he could move the laundry to the dryer. Five minutes later, I noticed that the dryer wasn't running so I asked him if he had moved the laundry over to the dryer. He said "Yes", and I said "But the dryer isn't running...". He said "Well, you didn't say start the dryer, you just said move the clothes over to the dryer." By the way, my son is available for coaching sessions on the subject of "How to passive aggressively undermine the authority figures in you life!"

And finally, the most surprising development was a statement that my daughter made the other day. I think she even surprised herself. She said "Dad...I can't believe I am going to say this, but thanks for making us do our chores. I am starting to feel a sense of accomplishment for a job well done." 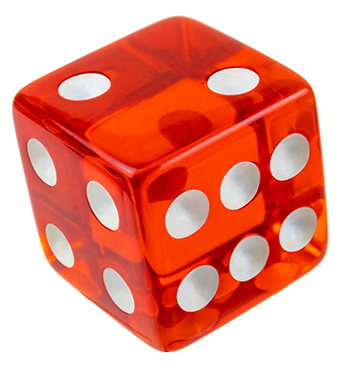 We continued using the job wheel for a few months, but I began to realize that it was still my job to remind the kids to do their daily and weekly chores. I put "Jobs" on the family meeting agenda and we brainstormed solutions. We play a lot of board games in our house, so the kids came up with the idea of using dice. We wrote down 5 chores that needed to be done. Each day the kids would come home from school and roll the dice. If they got a 1-5, they would do the chore on the list that corresponded with that number. If they were lucky enough to roll a 6, that meant they would get a free day with no chores.

This system was very popular in our family. The kids couldn't wait to come home from school and roll the dice. They would cheerfully do the chore that corresponded to the number or cheer with delight if they rolled a 6!!!