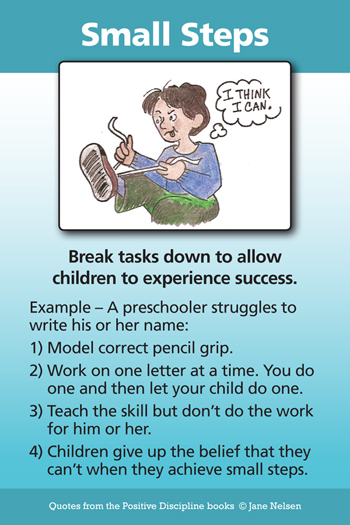 As parents, we can of course do everything better and quicker than our children. But how does this help your child? You have to decide if perfection and expediency are more important than encouraging your child to develop a deep belief in his or her capability.

Parents may not realize that doing too much for children (usually in the name of love) is discouraging. A child may adopt the belief “I’m not capable” when adults insist on doing things for him that he could do himself. Another possible belief is “Being loved means people do things for me.”

It may be helpful to remember that healthy self-esteem comes from having skills, and that pampering a child actually discourages the development of skills. Stop doing things for your child that he can do for himself and make room for him to practice—even when he does things imperfectly. When he says, “I can’t,” have patience and say, “I have faith that you can handle this task. I’ll show you the first step and then you show me the next step.”

Encouraging a child who believes that he is inadequate requires a great deal of patience, faith in the child’s abilities, and gentle perseverance in showing small steps instead of taking over.

We have (not really consistently) been trying to get our son to put his own shoes on when getting ready to leave the house.  Today it was time to get going and I asked him to get his shoes and try and put them on while I was upstairs and that if he needed help I would be down in a little bit.

When I came downstairs he was still struggling with the first shoe.  Usually this is when I would just step in and do it for him and, in fact, he was asking me "Mommy, you do it please."

When he was done there were a few things I could of corrected (too loose straps, etc.) but, and this was a HUGE success for me, instead of "fixing" it I just let it be figuring if they were actually too loose he would have the natural consequence and we would just stop and he could fix it. This was really a major success for me, not so much my son. I am always just swooping in and doing things for him or fixing his way, and he definitely has some issues with assumed inadequacy as a result. I've really been trying this week to not do that to him. I felt really proud of myself and of him. :)

We had another success this week. My son knows when we come inside the house it's his job to take his shoes off and put them away. It was that time and he wasn't wanting to listen. We were on the verge of a tantrum, not really in the midst of it or anything, but just a lot of "no" and laying on the floor not wanting to listen. So I got down on the floor and told him I needed a hug once, to which he responded "no."  Then I said it again, "I need a hug," he looked up and said "huh?" so I said it a third time and he got up and gave me a hug.

When we were done hugging I asked him, "What's your job when we come home?" and he sat right down and took his shoes off. It was awesome! If I had argued with him it would have turned into a tantrum, but instead I stopped myself, told him I needed a hug and afterward it's like he almost forgot what he was even protesting. Again a huge success for both of us.

Use your intuition with the Positive Discipline Tools

As with all the Positive Discipline Tools, it is important to use your intuition when applying them. Don't think about them as rules or techniques. Every child is different and every situation is different. If you want to help your child understand that shoes have a left and a right and help them learn the difference, this would be helpful. It is up to you how you teach your child about putting on their shoes. We need to take time for training and then allow our children to learn and grow.

Hi, I have a quick question regarding to the teaching of doing their shoes. If the child puts on his/her shoes in the wrong way, I mean, the left shoe on the right foot, should we fix it? Unlike the case of having loose straps, shoes on the wrong side may not have any consequences. Maybe we might feel comfortable as an adult, but to my knowledge, most children are happy about how the shoes are.