Child Won't Leave When it is Time to Go 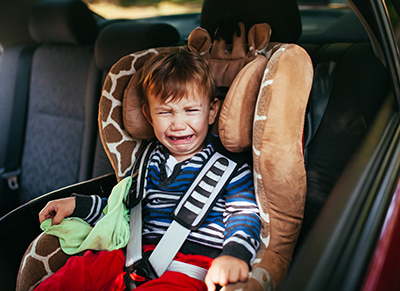 I am a single mother and have one 5-year-old son, Sean. Last night, I attended a seminar with Jane Nelsen after working all day. While I was at the seminar, Sean was at a drop in day care (Klubhouse) that stays open into the late evening. I have used this place before. Sean loves it there and he loves the care provider. My problem is I always have a power struggle with him when its time to leave, whether it's the Klubhouse, or his everyday care provider, or leaving the park — wherever.

I've tried using "consequences" with him, which is usually removing a privilege (story time, bedtime songs, a favorite toy, etc.) it doesn't always work, and never works the first time I ask. Last night leaving the Klubhouse was particularly bad — I'm crying as I recount this to you. When I arrived to get him last night, Sean asked if he could stay 2 more minutes to play Nintendo. I agreed. During those 2 minutes, I paid the bill and used the restroom. Then I told Sean "Okay, honey, your 2 minutes are up. Time to go." To which he responded "I want to play some more — just one more time." I said no and when he wouldn't leave the machine, I shut it off, took out the cartridge and said "Sean, its time to leave. The place is closing." (which was true). So he got up and headed for the front door, but instead darted off into the TV room which had a movie playing. So I shut off the TV (while he screamed about it) and told him he could watch a cartoon once we got home. Then Sean just huddled in the corner and said "I don't want to go home." You get the picture.

I eventually had to pick him up kicking, screaming, and crying, carry him to the car, and since he wouldn't get in his car seat, I had to do that for him too. He's a typical sized 5-year-old, so this was no small feat. While I backed the car out, he said "You're really stupid! I don't love you! I'm going to rip your face off so you die!" he continued with "You're stupid" for about a mile. (That word is not allowed at our house — so he knows it's "my button.") By the time we reached the freeway, he was alternating crying and calling me stupid. I lost it and slapped his face, told him to shut up with that talk. He was crying uncontrollably then, and for a short trip on the freeway he screamed and I was ready to burst into tears. When we got home, I unbuckled him and asked if he wanted to cuddle with me, which he did, hiccupping and crying on my shoulder for several minutes. I told him I was sorry I slapped him and we took a time-out together in the rocking chair. The rest of the evening was uneventful and we both went to bed shortly thereafter.

How can I avoid struggles like this. I cannot let him "stay" when a place is closing and am constantly giving him "2 more minutes" for everything. It makes me not want to go out in public for fear the struggle I always have.

Angie, I feel like crying with you. I have been there and know how awful it feels. That is why I am so grateful that I found the Positive Discipline Methods.

During the lecture I shared that a "misbehaving child is a discouraged child", but I didn't have time to go into the four mistaken goals of behavior: Undue Attention, Misguided Power, Revenge, and Assumed Inadequacy. I will not take time to say more about these goals now, but you can do a search on our website for "mistaken goals" and will find lots of information – and there are mistaken goal charts in all of our books. I hope you will read more about mistaken goals so you will have an even deeper understanding of my suggestions.

It is obvious to you that you are engaged in a power struggle – one that escalated to a revenge cycle. And, you have learned that punishment (even when poorly disguised as consequences) are not effective. You might try one or several of the following:

Many people see some of these ideas as "rewarding the misbehavior". When you understand mistaken goal behavior you will see that they break the cycle of discouragement and help a child do better after he feels better. Some of them are designed to redirect the child from using "misguided power" to using "useful power".

You might be reassured in fact, that this is a common issue for parents of 4-6 year olds. I do hope that you will find a copy of Positive Discipline and read the section on mistaken goals. It will help you understand that the way your son perceives the situation is VERY different from how you see it. My guess from afar is that he feels way overpowered and is feeling hurt (which in no way means that you meant to hurt him, it is just how he is perceiving things). The main clue is that his statements to you are hurtful statements, probably the most powerful things that he can think of to regain his sense of self in the moment.

Underneath you really understand that what he needs is love. You are much better than most moms in connecting with your child and resolving the problem. (It would not occur to most moms to take a time-out — or really a time-in — in a rocking chair together after this kind of conflict). Wow!

Your son is challenged by transitions. Especially transitions where you set the rules, or more accurately, when HE PERCEIVES that you are in control and set the rules. This doesn't mean you shouldn't set limits, you should. But when you do it use the situation to give him as much control as possible WHILE STILL RESPECTING YOUR NEEDS AND YOURSELF. For example, when he tells you "two minutes" (he is setting the time), just use that opportunity a little more. Here is a sample conversation:

You: How much more time do you need?

You: Hmm... I think I can agree to that. How will you and I both know that two minutes is up.

Him: (he might not know...but some computer games have a time, there may be a clock in the room, there might be a digital watch on someone's wrist).

You: So what you are saying is that you need a little more time and that in two minutes you will be ready to go.

You: Okay I can agree to that, I will go pay the bill and come back and then we'll check if two minutes is up. (If you think it will take longer you can suggest at the beginning that today even 3 or 4 minutes might be ok...it would be best if you come back to him before the time is up...notice that the clock isn't quite there yet and say...I'm ready but according to our agreement your time isn't up yet so I'll wait patiently).

Then when you come back, you say: Ok honey, now is the time.

Him: But I want more time.

You: (kindly, firmly, at his level) What was our agreement?

Him: (He will probably argue)

You: What was our agreement? (This might need to be repeated...and he will make a scene probably but you will stay respectful and he will "get it" and grudgingly - with a display - comply. Ignore the scene and just say "Thank you for keeping our agreement")

I hope one (or more) of these ideas work for you,