Break the Code of Misbehavior 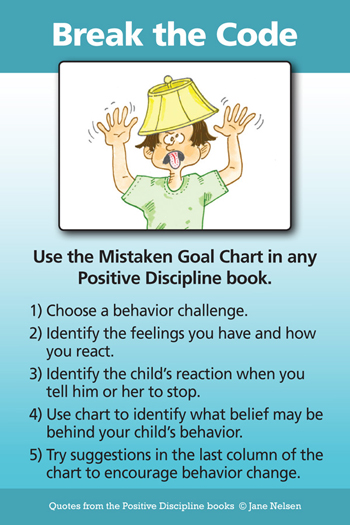 How you “feel” in response to the misbehavior provides the first clue to your child’s discouragement. You heard right. Your feelings help you break the code to your child’s mistaken belief about how to achieve belonging and significance—the true goal of all people. For example, when you feel irritated, annoyed, worried, or guilty, it is likely that your child’s mistaken goal is Undue Attention, based on the mistaken belief that, “I count (belong) only when I’m being noticed or getting special service. I’m important only when I’m keeping you busy with me.”

The second clue is your reaction to the misbehavior. Again, you heard right. The third column of the Mistaken Goal Chart summarizes adult behaviors that actually feed a child’s discouragement. Let’s take an example. Suppose your child is interrupting. You feel annoyed. You scold your child for interrupting. She stops for a few minutes (your third clue that the mistaken goal is Undue Attention per the fourth column of the Mistaken Goal Chart). By scolding, you have reinforced the discouragement. In a few minutes your child will try harder to get undue attention.

Once you have the three clues, you can break the code and understand what your child really needs to feel encouraged, “Notice Me. Involve Me Usefully.” Suggestions for what this kind of encouragement would look like are in the last column of the Mistaken Goal Chart. For example, one mother shared that her four-year-old constantly interrupted her the minute she got on the phone. This mom decided to encourage her daughter by choosing to “redirect by involving her child in a useful task to gain useful attention.”

The daughter stopped interrupting and gained attention by contributing instead of annoying. This could be the beginning of changing her belief of something such as, “I belong when I am helping others,” instead of, “I belong only when others make me the center of the Universe.”

Change the Belief, Not Just The Behavior

You have read an example of breaking the code for the mistaken goal of Undue Attention. The following activity will help you break the code for specific behaviors that are challenging to you so that you can be encouraging to your child and to yourself.

Use this worksheet until it becomes second nature and you will earn an honorary degree as a behavior detective and encouragement expert.