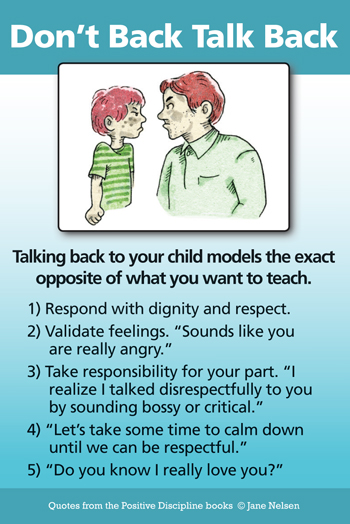 Mrs. Henderson told her son, Jon, for the third time that evening, “You had better do your homework before it gets too late."

Jon shot back, “If it is so important to you, why don’t you do it!”

Mrs. Henderson was shocked. After all, she was only trying to help. She reacted by saying, “Don’t talk to me that way, young man. I’m your mother.”

Jon reacted right back, “Well, don’t talk to me that way. I’m your son.”

At this point Mrs. Henderson shouted; “Go to your room right now. You are grounded until you can learn to be respectful.”

Jon shouted back, “Fine,” as he stomped off to his room and slammed the door.

Why is it that parents think it is their job to see that homework gets done? Oh, I can hear your objections already: “We can’t just let him fail.” Of course parents don’t want their children to fail. All the more reason to teach children self-discipline, self-control, goal setting, and problem-solving skills instead of trying to control them. All the more reason to communicate WITH children instead of TO them, FOR them, or AT them. How to accomplish respectful communication and help children develop a sense of capability and self-discipline is the focus of Positive Discipline.

For now let's discuss “backtalk” and how to stop “back talking back.” The following suggestions are from the book Positive Discipline A-Z by Jane Nelsen, Lynn Lott, and H. Stephen Glenn.

Children can learn that their parents are willing to take responsibility for their part in an interaction. They can learn that back talk isn’t effective, but that they will have another chance to work on respectful communication.

After a workshop, where we did an experiential activity on understanding the belief behind the behavior, we took a break. An eighth-grade teacher walked back to his classroom to see how the substitute teacher was doing. On his way, he saw two students fighting. When he tried to break up the fight, one of the students said, “F——you.”

Instead of reacting, the teacher gently touched the student’s arm and said, “I can see how angry you are. Come walk with me.”

The student jerked his arm away but started walking half a step behind. The teacher said, “I’m guessing you are feeling hurt by something. Do you want to talk about it?”

The student might have felt overwhelmed by this sudden kindness instead of the usual expected punishment. Whatever the reason, he got tears in his eyes and told the teacher how angry (a cover-up for hurt) he felt because of an argument with his brother.

The teacher just listened until the student got it all out and calmed down. Then he said, “Do you know why I knew you were feeling hurt about something? It hurt my feelings when you said, ‘F——you.’ I knew you wouldn’t say that unless you were feeling hurt and needed to strike back at anyone in your path. I’m glad you felt safe talking to me. I’m glad you know I care. Would you be willing to meet with me after school, and we can talk about some ideas that might be helpful to you?”

The teacher told us about this incident when he came back to the workshop. He asked others to brainstorm some ideas for what to say when he met with the student again. The participants came up with several ideas, such as creating an Anger Wheel of Choice, but the idea the teacher liked best was to just spend some time talking with the student about his favorite things to do. He would not even mention the upsetting incident unless the student brought it up first. Focusing on what was positive in the student’s life would help him see that he had the power to separate himself from his brother’s taunting. This teacher had a deep understanding of the power of encouragement (through spending special time with this student) to motivate behavior change.