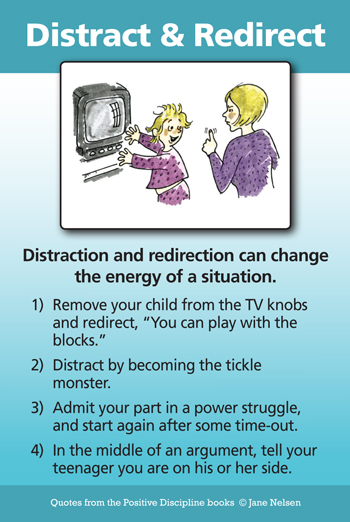 Children under the age of three do not understand “no” in the way most parents think they do. (And a full understanding of “no” doesn’t occur magically when the child turns three. It is a developmental process.) “No” is an abstract concept that is in direct opposition to the developmental need of young children to explore their world and to develop their sense of autonomy and initiative.

Oh, your child may “know” you don’t want her to do something. She may even know she will get an angry reaction from you if she does it. However, she cannot understand why in the way an adult thinks she can. Why else would a child look at you before doing what she “knows” she shouldn’t do, grin, and do it anyway? Knowing things as a toddler means something far different than knowing things as an adult. Her version of knowing lacks the internal controls necessary to halt her roving fingers.

Researchers like Jean Piaget discovered long ago that toddlers lack the ability to understand cause and effect (an excellent reason not to try to lecture and argue a toddler into doing what you want—or to use punitive time-out). In fact, "higher order" thinking like understanding consequences and ethics may not develop until children are as old as ten.

The following Piaget demonstration illustrate intellectual development, and helps parents understand why children can’t understand some concepts (such as “no”) as soon as adults think they can.

Find two glasses that are the same size. Then find one glass that is taller and thinner, and one glass that is shorter and fatter. Fill the two glasses that are the same size with water until a three-year-old agrees they are the same. Then, right in front of her, pour the water from one of these glasses into the short, fat glass, and the other one into the tall, thin glass. Then ask her if they are still the same. She will say, “No,” and will tell you which glass she thinks contains the most water. A six-year-old will tell you they contain the same amount and can tell you why.

This demonstration illustrates the thinking abilities identified by Piaget. When we understand that perceiving, interpreting, and comprehending an event are so markedly different for young children, our expectations as adults alter. The meaning children attach to their experiences does not match the meaning adults attach to the same experiences.

Erik Erikson, child development psychiatrist, identified the ages and stages of emotional-social development. Around the age of one, children enter the "me do it" stage. This is when they develop a sense of autonomy vs. doubt and shame. The ages of two through six herald the development of a sense of initiative vs. guilt. It is a child's developmental job to explore and experiment. Can you imagine how confusing it is to a child to be punished for what he is developmentally programmed to do? He is faced with a real dilemma (at a subconscious level): “Do I obey my parents, or do I follow my biological drive to develop autonomy and initiative by exploring and experimenting in my world?”

These stages of development do not mean children should be allowed to do anything they want. It does explain why all methods to gain cooperation should be kind and firm at the same time instead of controlling and/or punitive. This is a time of life when your child’s personality is being formed, and you want your child to make decisions about him or herself that say, “I am capable. I can try, make mistakes, and learn. I am loved. I am a good person.” If you are tempted to help your child learn by guilt, shame, or punishment, you will be creating discouraging beliefs (a sense of guilt and shame) that are difficult to reverse in adulthood.

The three most important discipline tools to use with children under the age of four is supervision, distraction, and redirection. Showing them what to do instead of what not to do (showing them how to touch nicely instead of saying, “Don’t hit.”) During the first years of life, your job is to keep your child safe without letting your fears discourage her. For this reason, supervision is an important parenting tool, along with kindness and firmness while redirecting or teaching your child.

Parents almost always cite the danger of a child running into the street as a justification for spanking a toddler. Reasons include the life and death nature of the situation, the need for immediate compliance, and the effectiveness of a spanking for getting a child’s attention. The thing they forget is that to a toddler, an angry, shouting, spanking parent is probably far more frightening than any street.

I always ask these parents, “After you have spanked your child to teach her to stay out of the street, will you now allow her to play in front of a busy street unsupervised?”

The answer is always, “No.”

They know, spanking or no spanking, that they can’t expect her to have the maturity and judgment to have that responsibility.

Distraction and redirection works well with toddlers. Fifteen-month-old Daniel was toddling toward his Dad’s computer. Dad called his name and Daniel looked at him, grinned, and toddled so fast in the direction of the computer that he almost fell. Dad picked him up, gave him a big hug, and took him over to his blocks.

What if Daniel keeps returning to the forbidden computer? How many times must a parent distract or redirect a child’s attention? Well, as many times as it takes. As we’ve mentioned before, it takes patience and perseverance to train a young child. If Daniel’s dad slapped his hand or spanked him, would he still want to play with the computer? Probably so. And even if spankings stop the behavior, what is the cost in self-esteem, doubt and shame? What are the lessons about violence? Kindly but firmly directing Daniel toward acceptable objects, and continuing to do so until he gets the message, guides his behavior without punishing or shaming, and without inviting a battle of wills.

Toddlers are experiencing individuation, learning to see themselves as separate, independent beings. It’s a natural and healthy process, but one that is frequently trying for parents. At one level it doesn’t take long for a young child to learn the power of the word “no,” or that by using it he can provoke all sorts of interesting reactions. Adults can’t always avoid these confrontations, but changing your own behavior and expectations can lessen their impact.