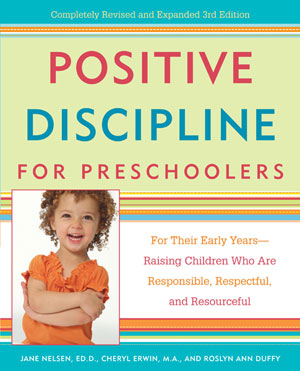 Carly is playing happily on the floor while her mom pays the bills. The phone rings, Carly’s mom answers—and suddenly Carly is glued to her mother’s leg, whining for juice. No amount of whispered urging will make Carly return to her play. Why?

Are these children misbehaving? Well, it certainly seems so. Most parents have experienced moments like these and have struggled to find a solution. As you will learn, before you can help your child choose different behavior, you must understand why your child is behaving this way, and what he is trying to accomplish with his behavior.

Behavior actually is a coded message that reveals a child’s underlying beliefs about himself and about life. When your child misbehaves, he is telling you in the only way he knows that (at least for the moment) he is feeling discouraged, or that he doesn’t belong. As you learn to decipher the code, you will find that your responses (and eventually, your child’s behavior) will change.

There is a parable that urges us to walk a mile in someone else’s shoes before we condemn or criticize his actions. When you can get into your child’s world (and walk in his small shoes), his behavior may begin to make sense.

Parents sometimes view any atypical behavior as misbehavior. For just a moment, put yourself in your child’s place; make an effort to get into his world.

Four‐year‐old Richard was at home with his mom, recuperating from the chicken pox. Mom had had to take a few days off from work and needed to spend some time on the phone keeping up with business. One afternoon, after a particularly long phone call, she walked into Richard’s room and found him absorbed in using the permanent marking pens. The imaginative little boy had looked at his chicken pox spots and been reminded of his dot‐to‐dot coloring book. Richard had removed his clothes and was busily drawing lines from one spot to the next with the marking pens. He was covered with brightly colored lines connecting his red spots.

Richard’s mom was wise enough to realize that this was not misbehavior. He was not trying to get attention or make a mess; he was being wonderfully creative. Richard had discovered that his body looked like a large dot‐to‐dot drawing, so he had simply connected the dots! What did his mom do? She let her sense of humor take over. She went and got the washable markers and finished connecting the dots with him. It would have been easy for Mom to scold and humiliate Richard. The entire event could have disintegrated into tears and misery. Instead, Mom made room for one of childhood’s treasured moments. When Richard is a dad himself, sitting with his children around Grandma’s table telling “Remember when . . .” stories, Richard and his mom will both laugh as they remember Richard’s dot‐to‐dot chicken pox! And as they laugh, they can re‐create that moment of fun and love shared long ago.

When three‐and‐a‐half‐year‐old Elsie’s dad picked her up from preschool one evening, he immediately noticed that Elsie’s hair was significantly shorter in the front than it had been that morning. “Did someone cut Elsie’s hair today?” the perplexed father asked Elsie’s teacher.

ʺ″No, she did that herself,” the teacher replied. “Elsie has been practicing a lot with the safety scissors lately.”

Was Elsie misbehaving? When Dad entered Elsie’s world, he realized that Elsie was actively exploring the wonders of using scissors. Today she had discovered that hair could be cut. Dad may not like his daughter’s new hairstyle, and he will surely explain to Elsie that he would prefer that she not cut her own (or anyone else’s) hair. He might also tell his intrepid daughter, “Let’s find some things you can cut.” This dad knows that Elsie’s experiment was a learning experience. Hair grows back. Elsie made a mistake, and her dad helped her to learn from it.

Both of these children were behaving in ways that are developmentally appropriate—and quite creative. Yet it would have been easy to interpret both situations as misbehavior.

So how do you know when a behavior is misbehavior? The key is discouragement. Children who feel discouraged about their ability to belong are more likely to misbehave. Neither Richard nor Elsie was discouraged; instead, they were exploring the world around them (and their parents and teachers should probably supervise the use of permanent markers and scissors).

Richard’s behavior might have been misbehavior if he had wanted his mother to play with him rather than talk on the phone. His behavior then might have been intended to get attention or power, as a mistaken way to feel belonging. As you have learned, one of the primary human needs is the need to belong, to feel a sense of worth and significance. When a child believes he doesn’t belong, he feels discouraged. Out of that discouragement he chooses what Rudolf Dreikurs, author of Children: The Challenge (New York, 1991), called a “mistaken goal of misbehavior.” They are considered “mistaken” goals because the child mistakenly believes the behavior will help him regain a sense of belonging. You may view misbehavior differently when you recognize that a misbehaving child is simply a discouraged child who wants to belong and has a mistaken idea about how to achieve this goal. Click Here to Download The Mistaken Goal Chart

Three‐year‐old Maggie is visiting her grandparents’ house on Thanksgiving, with all the other aunts, cousins, and members of her family. When Grandma goes to see what’s taking Maggie so long in the bathroom, she finds Maggie tearing a roll of toilet paper to shreds.

Is Maggie misbehaving? It would be understandable if her grandmother’s first response was anger.

Getting into a child’s world is a bit like looking through a kaleidoscope. Pretend that you are Maggie’s grandmother. What do you see when you look through the kaleidoscope? You may see piles of shredded paper everywhere, tinged by the red glow of your own anger. Now turn the kaleidoscope slightly and look again. Look at Maggie, who has just been chased away from the kitchen because she was underfoot. Look at Maggie, who just got told by her big sister, Joan, that she was too little to play Monopoly with Joan and her older cousins. Look at Maggie, who wanted to show Grandpa how to do Itsy Bitsy Spider but was abandoned when he had to go help move chairs into the dining room. What might Maggie really be saying with her toilet paper? How is she really feeling? What might stop Maggie from further acts of destruction?

How do you suppose most adults would react to Maggie’s behavior? What would you do? Does understanding what Maggie’s world feels like just now influence your response?

Understanding Maggie’s world does not mean that deliberately making a mess is okay. But understanding some of what Maggie is experiencing is likely to affect how her grandmother responds. Maggie will still have to pick up all the tiny bits of paper. Armed with love and understanding, Grandma may be more likely to help Maggie pick up the pieces and maybe invite her to help roll out pie dough afterward.

Let’s turn the kaleidoscope together and take a closer look at the four coded messages of discouraged children.

If you can learn to read the code behind your child’s behavior in different situations, you can deal effectively with his beliefs instead of just the behavior itself. There are three specific clues that will help you break the code. Let’s examine the clues that help you decode the message behind a child’s misbehavior—and, finally, what to do that will encourage your child and change his behavior.

Your Own Feelings in Response to the Behavior

How you feel in response to a child’s misbehavior is the first important clue to understanding the child’s mistaken goal. For instance, when the child’s goal is undue attention, her actions invite adults to feel annoyed, irritated, worried, or guilty. When a child seeks misguided power, adults usually feel challenged, threatened, or defeated. When the child’s mistaken goal is revenge, her actions invite adults to feel hurt, disappointed, disbelieving, or disgusted. When a child is so discouraged that she gives up completely (the mistaken goal of assumed inadequacy), adults also feel inadequate, despairing, hopeless, or helpless.

Your Usual (Ineffective) Attempts to Stop the Behavior

Another clue is your usual response to your child’s behavior. Adults often respond to the behavior of each mistaken goal in predictable ways. For instance, Dad and Ryan are constantly battling over something, whether it’s what to wear, how much to eat, or how long Ryan can play at the computer. Their struggles reveal an ongoing battle for power: Dad gives a command, Ryan resists, and Dad reacts by fighting with Ryan, thinking, “You can’t get away with this; I’ll make you do it.” Some adults just give in. In either case, there is a power struggle with a winner, a loser, or a slight pause while each side gathers strength and ammunition to continue the battle. The third column of the Mistaken Goal Chart lists the common reactions of adults to each of the four mistaken goals’ behaviors.

Your Child's Response to Your Ineffective Action

The next clue in deciphering a child’s mistaken goal is how a child responds when the adult tries to stop the misbehavior with punitive or permissive methods (instead of Positive Discipline methods).

When the teacher at his child care center tells five‐year‐old Matthew, “Behave yourself,” Matthew usually responds by damaging his toys or knocking over other children’s blocks. Sometimes he even yells, “I hate you!” Matthew’s mistaken goal is revenge. The goal is revenge when a child reacts to an adult’s actions by hurting others, damaging property, or retaliating in some other way, such as using insulting words.

Sometimes it is hard to determine a child’s mistaken goal. Don’t be overly concerned about getting the “right” answer, and don’t get hung up in “analysis paralysis.” Observe carefully, and do the best you can. Remember, no one is perfect. Learn to see your mistakes as opportunities to learn and grow.

Thank you for this except. We have recently gotten the Positive Discipline book, and I am almost finished reading it. I have noticed a huge change in both of us already. I am going to be getting the preschool book and the teen one. (We have 4 kids who are 12, 9, 6, and 3 1/2). Our youngest has the most horrendous temper tantrums...she screams, kicks, throws whatever is in her path. Sometimes "marching out her angries" helps, sometimes cuddling with momma helps. Not always, and I am afraid she is going to hurt someone or break something when she starts throwing. After reading this excerpt, I understand her perspective. Just not sure how to stop the throwing. She lobbed an old Fisherprice train car from one end of the house into the kitchen at the other end. Thank you again for this article!