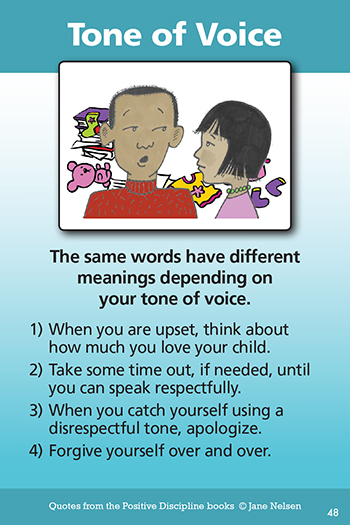 Have you noticed how terrible it feels to listen to another parent scold a child? Because you are not emotionally involved, you notice the shrinking posture of the child and empathize with the shame and discouragement he or she must be feeling.

During our Positive Discipline classes and workshops, we do an experiential activity called “The Competent Giant.” Participants pair up and take turns being a parent who stands on a chair and scolds the other person who is role-playing the child. Then they switch roles. We then process what they are thinking and feeling in the role of the child. I’m sure you can imagine the words they share: “scared,” “shamed,” “hurt,” “not good enough,” “wanting to shrink away and disappear.”

Then we ask what they were thinking and feeling in the role of the parent. They share words such as “angry,” “frustrated,” “out of control” (even though they are acting controlling). Then they have to admit that they are not thinking rationally. They are not looking into the eyes of the child, and they are not aware of the effect they are having on the child.

Once out of the role, they also share how hard it was to even pretend they were scolding when they are not really upset. They are too aware of the effect they are having on the child. It shows how unlikely it is for parents to really yell at their children if they’re thinking rationally.

This tool is to remind us how important it is to remember our tone of voice and the effect it has on our children—and then to use a tone that is encouraging and empowering.