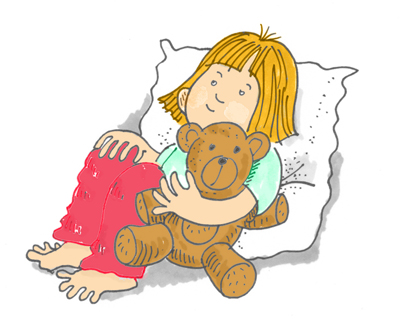 An excerpt from Positive Time-Out

Many parents and teachers say "Go to your room (or to the corner) and think about what you did." I'm amazed that many adults don't know the answer when I ask, "Do you know why that is a ludicrous statement?" They come up with all kinds of responses such as, "The child might be too angry to think about it." "He might fall asleep." "She might not understand what she did wrong." All of these statements are true, but what is ludicrous is the assumption that we can control what a child thinks. A look of awareness appears on their faces when I ask, "Do you really think you can control what a child thinks?

Most adults do not realize that children are constantly making decisions about themselves, about their world, and based on those decisions, about what to do to survive or to thrive. (The four categories of decisions are covered in Chapter Five)

Negative time out is based on the silly thought that in order to get children to do better, first we have to make them feel worse. Positive time out is based on the understanding that children "do" better when they "feel" better. Check out these premises for yourself. Do you do better when you feel worse, or when you feel better?

It is fun to ask, "How would you respond if you spouse said to you, 'Go to your room and think about what you just did!'"? Most people laugh and say something such as, "I don't think so." Why do we think negative time out would be effective for children when it wouldn't be effective for us?

Negative time out is certainly not effective if it perpetuates a child's discouraging beliefs about herself and her environment. Nor is it effective if those beliefs increase her need for revenge or rebellion in whatever form it takes.

The Effectiveness of Positive Time Out

On the other hand, positive time out can help children learn many important life skills, such as the importance of taking time to calm down until they can think more clearly and act more thoughtfully. When human beings are upset, they function from their reptilian brain (the brain stem) where the only options are fight or flight. I joke with people by saying, "When children push your buttons, you react from your reptilian brain, and reptiles eat their young."

Positive time out allows children (and adults) space to calm down until they are again functioning from their rational brain (the cortex)—so they can problem-solve and learn. Positive time out encourages children to form positive beliefs about themselves, their world, and their behavior. In this state of mind, they can learn from their mistakes and/or problem solve on how to make amends for any hurt or damage their behavior might have caused.

When a method has really worked with children, they feel empowered and motivated to improve from an inner desire and locus of control (as opposed to control from others), and they develop skills that will help them solve problems and improve behavior.

Adults can empower children in these ways when they understand a few basic principles of human behavior:

3. Humiliation and shame are not effective motivators. Over the last decade, a number of professionals concerned with children (such as pediatricians, psychiatrists, and social workers) have formally adopted positions in opposition to spanking, paddling, or humiliating children in any way. These specialists have paid attention to the research demonstrating that the long-range damage to children far outweighs the immediate advantage of controlling behavior through punishment.

Time Out for Children Under the Age of Reason

Children under the age of 2-1/2 should not be sent to time out unless they choose it—which may be very rare--or unless you go with them. There are, of course, exceptions to most rules. One mother approached me after a lecture and shared how she used positive time out successfully with her 18-month-old child. She said her son, Jason, had a satin pillow that he liked very much. He seemed to find this pillow very soothing. When Jason seemed cranky, she would say to him, "Would you like to lay on your comfy pillow for awhile?" Sometimes he would just toddle off to his pillow and lie down until he felt better. If he hesitated, she would ask, "Do you want me to go with you?" When he wanted her to go with him, they would just snuggle for awhile, or they would look at one of his picture books. Soon he would be ready to toddle off again to busily explore his world.

This mother had the attitude and understanding that is required to make positive time out work with a child who has not reached the age of reason (or any child, for that matter). She understood child development enough to know that Jason was not misbehaving. Even though a misbehaving child is usually a discouraged child (see Chapter 5), for toddlers it is usually something else: tiredness or frustration because of their lack of skills about how to get their needs and wants met. They often feel confused and rebellious when parents or teachers don't understand their developmental need to explore and experiment. (See Positive Discipline: The First Three Years for more information on developmental needs.) Her attitude was one of loving gentleness, patience, kindness, and firmness. She was firm in her knowledge that Jason's behavior was socially unpleasant and frustrating to him, and that something needed to be done about it. She was kind in her method of helping him deal with it.

If Not Punitive Time Out, Then What?

Parents and teachers often tell me they have tried everything to deal with a misbehaving child, and that nothing works. When I ask them to list everything they have tried, everything on their list is punitive. Why is it so difficult for adults to give up punishment when they experience over and over that it doesn't work? Answer: They are afraid the only alternative is permissiveness. Positive time out it not permissive, nor are any of the other non-punitive methods suggested in this book.

Criteria for Positive Time Out

Positive time out is designed to encourage children and to teach them self-control and self-discipline. It is respectful because children are involved in the process (by helping to create a space that will be encouraging) instead of objects or victims of the process. Positive time out teaches children to understand that their brains don't function well when they are upset. They learn the value of taking time to out to calm down until their brains are functioning in a way that is advantageous to them, rather than detrimental.

Before adults can convey the benefits of positive time out, they have to get rid of their old ideas about punitive time out. Adults and school age children love the analogy of time out in sports where the purpose is to stop the clock, catch your breath, regroup, take a look at what isn't working, and come up with a new plan. Positive time out can do the same for both children and adults. It can stop the clock on negative behavior and allow time for calming down before new behavior is possible. Since children do better when they feel better, they will be able to regroup and come up with a new plan that will serve them and others.

Another analogy that helps children and adults understand the benefits of positive time out as a nurturing experience is to think about the comfort of sitting on Grandma's lap.

The good news is that we are born with several coping (self-soothing) abilities and can learn other coping skills. The bad news is that many parents and teachers think good parenting and teaching means to distinguish children's self-soothing abilities instead of allowing them to develop. These same parents and teachers avoid teaching additional self-soothing skills because they are so busy fixing every problem a child may encounter, or using punishment for behavior instead of helping the children manage their own behavior.

Positive time out provides time for children to enhance their innate ability to self- soothe instead of having this ability extinguished by parents and teachers who overprotect or punish. Positive time out teaches the valuable life skill of learning to take time to feel what you feel, and to calm down until you can behave in more constructive ways.