A History of Positive Discipline 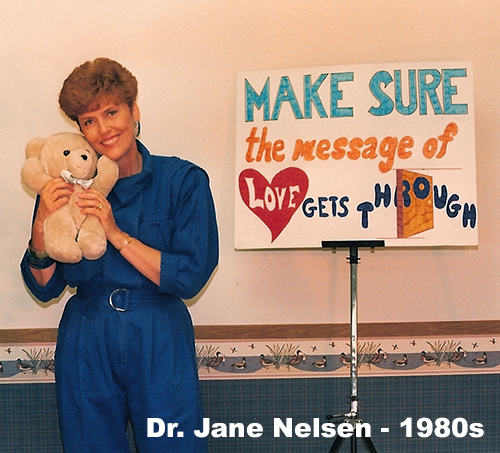 Positive Discipline is based on the philosophy and teachings of Alfred Adler and Rudolph Dreikurs. I was not privileged to study under either of these great men, but I would like to acknowledge the people who introduced me to the Adlerian approach. It has changed my life and greatly improved my relationships with children at home and in the classroom.

I am the mother of seven children, and grandmother to 22. Many years ago, when I had only five children, including two teenagers, I was frustrated by the same child-rearing problems experienced by so many parents today. I did not know how to get my children to stop fighting with each other, to pick up their toys, or to complete the chores they had promised to do. I had problems getting them to bed at night—and then getting them up in the morning. They didn’t want to get into the tub—and then didn’t want to get out.

Mornings were miserable, for it seemed impossible to get them off to school without constant reminders and irritating hassles. After school was a continuation of battles over homework and chores. My "bag of tricks" included threatening, yelling, and spanking. These methods felt terrible (to me and my children) and they didn’t work. I was threatening, yelling, and spanking for the same misbehaviors over and over again. This became very clear to me one day as I heard myself repeating, "I’ve told you a hundred times to pick up your toys." It suddenly dawned on me who the real "dummy" was—and it wasn’t my children. How ridiculous that it took me one hundred times to realize my approach wasn’t working! And, how frustrating because I didn’t know what else to do.

Compounding my dilemma was my status as a college student, majoring in Child Development. I was reading many wonderful books that expounded the many fantastic things I should be accomplishing with my children; but none of them explained how to achieve these lofty goals. Imagine my relief when on the first day of a new college class I heard that we were not going to learn many theories, but would thoroughly investigate the Adlerian approach, including skills for practical application to help children stop misbehaving—and to teach them self-discipline, responsibility, cooperation, and problem-solving skills.

To my delight, it worked. I was able to reduce fighting among my children. I learned to eliminate morning and bedtime hassles and to achieve much greater cooperation in the completion of chores. The most important change was that I found I enjoyed being a mother—most of the time.

I was so enthusiastic that I wanted to share these ideas with others. I started small parent study groups with friends and neighbors. Then I had the opportunity to facilitate a parenting group for parents of educationally, physically, and mentally handicapped children. At first the parents of these children were reluctant to try these methods. They were afraid their children would not be able to learn self-discipline and cooperation. Many parents of handicapped children do not understand how clever all children can be at manipulation. The parents in this group soon learned how disrespectful they were being to their children by pampering them rather than helping them develop their full potential.

I was subsequently employed as a counselor in the Elk Grove Unified School District in California, where many parents, teachers, psychologists, and administrators were supportive of Adlerian concepts to increase effectiveness with children at home and in the classroom. I am especially grateful to Dr. John Platt, psychologist, whom I adopted as my mentor. He taught me a great deal.

Dr. Don Larson, assistant superintendent, and Dr. Platt were responsible for obtaining a Title IV C grant and received Federal funding to develop an Adlerian Counseling Program. I was fortunate to be chosen as the director of this program. During the three years of developmental funding, the program was so effective in teaching parents and teachers to help children change their misbehavior that the program achieved recognition as an exemplary project and received a three year grant for dissemination to school districts in California. We adopted the name Project ACCEPT. (Adlerian Counseling Concepts for Encouraging Parents and Teachers). Through this experience I had the opportunity to share Adlerian concepts with thousands of parents and teachers. It was very exciting later to hear them share their stories of how they used the skills they had learned in the Project ACCEPT training workshops. I learned more than I taught. I gratefully acknowledge those who gave me permission to share their examples with others.

Special thanks go to Frank Meder for his contributions in the area of class meetings. He was able to grasp and implement a very important principle—that freedom is impossible in a social environment without equal emphasis on order.

Acknowledgment and sincere appreciation go to those who worked as paraprofessionals for Project ACCEPT. Susan Doherty, Judi Dixon, George Montgomery, Ann Platt, Barbara Smailey, Marjorie Spiak, and Vicky Zirkle worked tirelessly as leaders of parent study groups while organizing and developing materials used in the project. They all shared many examples of the effectiveness of the principles with their own families and the families with whom they worked. 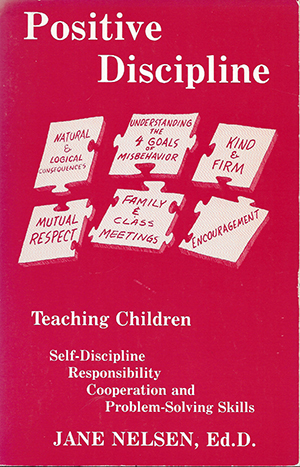 I wrote and self-published Positive Discipline in 1981. I did it myself—not enough money to hire a graphic designer or editor. Much to my surprise, the first 2,000 sold within one year, so I printed another 5000—again gone in a year. So, I hired a book designer for the next printing of 10,000. In six years, I had sold over 80,000 copies as a self-publisher when Ballantine discovered the book and began publishing Positive Discipline in 1987. It has now sold more than one million copies—and I have written many other Positive Discipline titles with several co-authors.

Lynn Lott is the special friend and colleague who helped me get back on track when one of my children experimented with drugs. I was ready to stop using Positive Discipline concepts and instead use control and punishment. I attended a workshop she facilitated on working with teenagers at a NASAP (The North American Society of Adlerian Psychology) convention and knew immediately that she could get me back on track. At the time we only saw each other once a year, but I asked her to write a book with me because I have learned that if I can make something work for me, then it is worth sharing with others. We have since written four books together, and she has had considerable influence on the growth and development of Positive Discipline concepts.

My children have always been sources of inspiration, opportunity, and love. I refer to them as my before, during, and after children. Teryl and Jim were already teenagers when I learned about these concepts. Kenny, Bradley, and Lisa were seven, five, and three respectively. Mark and Mary were born after I had been teaching parent study groups for a while. They have been the inspiration for many opportunities to recover from my mistakes and keep learning. They taught me over and over that the only time I thought I was an expert was before I had children.

The greatest benefit of all has come from the understanding of principles and skills that increase mutual respect, cooperation, enjoyment, and love. Every time I stray from the Positive Discipline principles, I create a mess. But I have learned that all I have to do is go back to the methods and skills and I not only clean up the mess but can make things better than they were before. Mistakes truly are wonderful opportunities to learn.

Over the years I have been blessed to have many people come into my life because of their love for Positive Discipline. There is now a non-profit organization, the Positive Discipline Association (www.positivediscipline.org) which has been formed for training and certification, research, workshops, scholarships, demonstrations schools, quality assurance, and to ensure that the work continues long after I am gone.