Allowances Can Teach the Life Skill of Money Management 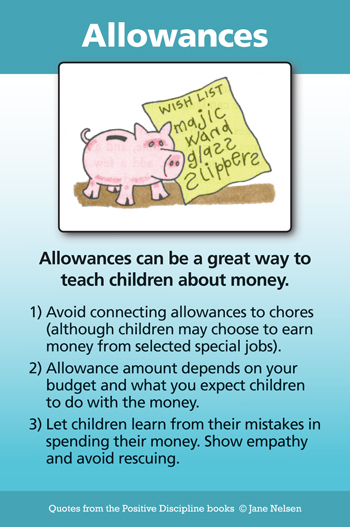 The Johnson family was about to complete their weekly grocery shopping when five-year-old Jimmy started coaxing for a toy car.

Mom asked politely, "Have you saved enough money from your allowance to buy it?"

Jimmy looked sad and said, "No."

Mom suggested, "Maybe you would like to save your allowance so you can buy that car when you have enough money."

Of course Jimmy never saved enough money to buy the car.  He wanted the car bad enough to spend Mom's money, but not enough to save his own money.

Five-year-old Sally wanted a new bicycle.  Dad worked out a plan with Sally that as soon as she could save $5.00 toward a bicycle, he would pay the rest.  They got a glass jar, pasted a picture of a bicycle on it, and Sally put her whole allowance (four quarters) in the jar the first week.  Since Sally's allowance was only $1.00 a week, and it was difficult for her to resist the ice cream truck, it took her three months to save $5.00.  This seemed like an eternity to Sally, but every time she brought up the subject of a new bike, her Dad would ask, "How much have you saved?"  They would go to the jar, count the quarters, and figure out how many more quarters she needed to reach her goal of $5.00, and Dad would encourage her that she could do it.

In the sixth grade Amy was given a school clothing allowance.  Mom and Amy went through her closet together to figure out what she needed, and then sat down to work on a budget to see how much she could spend for each item she wanted to purchase.  Amy had to make decisions such as: would she buy two expensive pairs of jeans or four less expensive jeans.  During their shopping expedition, many times Mom heard Amy say, "I like this, a little bit, but I don't like it "a lot".  I'm not going to buy anything I don't really like a lot."

In the seventh grade Sam started saving diligently for a car because his parents had taken the time to discuss with him that they would not be willing to buy him car when he was 16 unless he put in as much effort as they did.  They agreed to match what he saved by the time he was ready for a car—if he had a job so he could buy the gas and insurance.  Together they investigated the cost of insurance, and Sam learned that it was much less expensive if he had a "B" average on his report cards and decided he would work hard to maintain a "B" average.

Jimmy, Sally, Amy, and Sam are all learning the value of money.  They are learning delayed gratification, goal setting, and the need to work and plan for what they want.  They are also learning many side benefits such as cooperation, responsibility, and appreciating what they get.  They all made poor decisions along the way.  Amy learned to buy only what she "really liked" after buying some things she didn't like so much and then not having money left for things she really liked.  Sally finally learned that she wanted a bicycle more than she wanted ice cream.  Sam did not save enough money for the car of his dreams, but learned to fix the clunker he could afford.

Providing allowances is a tool parents can use to teach children many valuable lessons.  Too many parents give "handouts" instead of allowances.  Handouts are often based on the whims of parents or the ability of kids to coax, whine, and manipulate.  Kids believe that checks and credit cards provide an unlimited supply of money.  It is a very disrespectful system that leaves everyone feeling bad—parents who feel manipulated by coaxing, crying, or other forms of demand for money, which is never appreciated by their children; and children who do not learn the confidence and self-respect that comes from dealing with money responsibly.

The allowance system is respectful to all concerned.  It is negotiated in advance based on what the family can afford and the needs of the kids.  If the children's needs are greater than the family budget, they can be encouraged to supplement their income by babysitting, washing cars, or mowing lawns.

Many problems can be avoided when allowances are not tied to chores.  A four-year-old may enthusiastically make her bed for 10 cents, but will ask for 50 cents by the time she is eight.  By the time she is 14 she won't want to do it even for a dollar.

Allowances can be started when children first become aware of the need for money—when they start wanting toys at the supermarket or treats from the ice cream truck.  Some families start with a quarter, a dime, a nickel, five pennies and a piggy bank.  A small child loves the variety and enjoys putting the money in the piggy bank.  As they get older, allowances can be based on need.  They learn budgeting when parents take time to go over their needs with them and decide accordingly on the amount of their allowance.

If kids run out of money before the end of the week it is important to empathize but not rescue.  They need the freedom to spend their allowance as they wish.  If they spend it all at once they have the opportunity to learn from that experience—so long as parents don't interfere or make judgments.  This does not mean that allowances cannot be renegotiated.  Renegotiation is an important part of the learning process as kids get older and their needs change.  Birthdays or the start of a new school year is a good time to sit down together and look at needs and go over budget planning.

A clothing allowance is a good addition to a regular allowance as soon as kids are old enough to be aware of fashion and want more clothing than is really necessary.  A clothing allowance provides limits and encourages responsible decision-making.  When children are younger there may be two shopping trips each year—one in the spring and one in the fall, each with a certain dollar amount allotted.  As children get older they may get a certain amount each month for them to budget.

Allowance and clothing budgets help children learn what their values are, to make decisions and live with the results, and to use money responsibly.  By the time they leave home, they are ready to manage their finances entirely.