Understanding the Mistaken Goal of Revenge 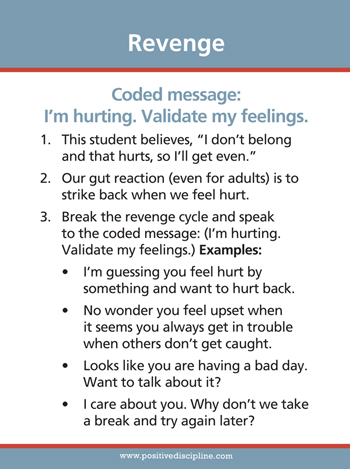 If you feel hurt or find yourself saying, “I can’t believe he/she just did that,” this is your clue that the student's mistaken goal of the misbehavior is revenge.  When people feel hurt, they hurt back (often without even realizing what they are doing). For the mistaken goal of Revenge, the student’s belief is “I don’t belong, and that hurts, so I’ll get even by hurting others.” The coded message that provides clues for encouragement is “I’m hurting. Validate my feelings.”
It can be difficult to understand the mistaken goal of revenge because too often we have no idea where hurt feelings come from. A student may be hurt by something that happened at home, in another class or with his or her peers, and then takes it out on you. Even when understanding the mistaken goal of revenge, it is difficult to avoid "reacting" with a little revenge of our own.
Validating a revengeful student’s feelings is an important (but sometimes difficult) first step. The basic need to belong must be addressed, but it is also important to follow with finding solutions to the problem.  As a middle school counselor, Kelly was once called to a classroom by a teacher for help. As Kelly walked into the room she saw a student pick up his desk and fling it as hard as he could at the wall. This student had experienced deep discouragement in his previous schools because those programs simply did not have the resources in place to adequately serve his learning challenges. This had resulted over time in the student developing behavior challenges as well.  The first thing Kelly did was validate the students’ feelings by recognizing his hurt and also how hard he has been working in Math. It turned out that the issue that triggered the situation was that in spite of putting forth lots of effort, the student was upset and angry because he failed his math test. Rather than respond with punishment, shame, or blame, Positive Discipline tools helped Kelly and the classroom teacher connect with the student, help him calm down, and then focus on solutions for managing his strong feelings. Instead of sending him away to the principal or detention, Kelly and the student went together to her office to discuss what happened and work on a plan. Asking the student, “what would help you?” was key. The student shared he had no place to study at home, and he needed extra help. He was extremely frustrated. The school staff worked as a team to develop a plan to support this student. On his own, the student recognized that he needed to apologize to his teacher and classmates. Luckily there was no damage to the wall or desk. But, we have full faith that if there had been, the student would have taken responsibility and worked out a plan to repair these items. The problem of having strong feelings when you are upset in class was put on the class meeting agenda. The class brainstormed ways to deal with being upset in class. This process was encouraging and helpful to the entire class.
As Dreikurs said, “A child needs encouragement like a plant needs water.” Knowing that there is a belief behind every behavior, and finding out what it is, can be so helpful in providing clues about how to encourage.

1. Our gut reaction (even for adults) is to strike back when we feel hurt.
2. Break the revenge cycle and speak to the coded message.
Examples:
• “I’m guessing you feel hurt by something and want to hurt back.”
• “No wonder you feel upset when it seems you always get in trouble while others don’t get caught.”
• “Looks like you are having a bad day. Want to talk about it?”
• “I care about you. Why don’t we take a break and try again later?”