My Teenager Doesn’t Keep His Agreements 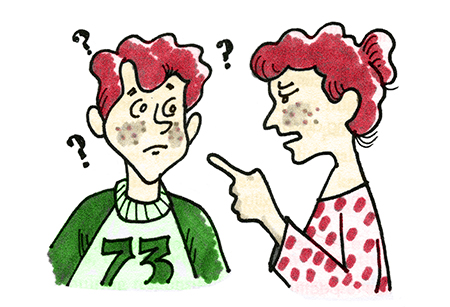 "My Teenager Doesn’t Keep His Agreements!" If I had a nickel for every time I’ve heard that line. Does anyone have a teenager who does keep all his or her agreements? Did you keep all your agreements when you were a teenager? Now that we’ve established that this is a typical complaint of many parents of teens, what is an effective way to handle this challenge?

It is with pleasure that I quote Certified Positive Discipline Trainer, Kelly Pfieffer, who responded to a parent who wondered how to get her son to keep his agreement to take out the trash:

Wow, can I relate.  I don't have a similar issue with my 17-year-old son. His job is to bring in the trash. He works each Wednesday evening and would "forget" to bring the trash & recycling bin in when he got home. Then he would forget again in the morning though the trash can is clearly visible on his way to his car on the way to school. So the trash can would sit out all day the next day and my husband would be especially upset because it's obvious to the neighbors that our trash can has not been brought in.

After reminding & nagging, I was SOOOOOOOOOOOo frustrated with him for a while. Finally, I wondered how I could connect with my son, follow through and teach my son about responsibility.  The thing I decided was to simply make the job one that my son and I do together.

When he got home from work each Wednesday night, I gave him the opportunity to bring the trash in on his way in the house. Of course, he didn't so I would greet him with a hug and cheerfully say, "We're doing the trash together now. Let's get it done." So one of us would get the trashcan and the other would get the recycling bin. We'd put them away and walk in the house together. I had resolved that I would not piggy back or act negatively and that I would enjoy doing this task with my son.

It hasn't been perfect, but I have noticed a HUGE improvement and if needed, I will do the task with him again. Also really, his attitude about the job is much better and he remembers most of the time. Now it's unusual for him to forget when it used to be unusual for him to remember the trash.

I would like to make a few points about why I love Kelly’s answer:

You may be familiar with the Positive Discipline concept of “connection before correction.” Nagging and punishment does not create a connection. Instead, they create distance and hostility. In the long-term, connection is more important than the trash—and is the most likely thing you can do to encourage cooperation for keeping agreements.

Modeling What You Want

We all know that example is the best teacher, yet too often we don't model what we want. What are parents modeling when they yell, nag, and punish? On the other hand, Kelly modeled putting relationships first and using the "trash" as an opportunity for connection? Which example provides the best long-term memories and decisions about how to behave?

Trash is not on the list of top priorities for teens (just as it wasn't on yours when you were a teen). What is on their list: friends (do I fit in or not), girl/boy friends (am I good enough to have one), grades/homework (can I get good ones or not; if not should I rebel or act like I don't care; drugs (should I or shouldn't I), sex (should I or shouldn't I), pressure (since I can never seem to please my parents, why try?) electronics (I'm not addicted, I just like it), sports, etc., etc. etc.

Keep in mind that who your teen is today is not who he or she will be forever. The teen years are a time of intense individuation—discovering who they are separate from their parents. Healthy individuation requires a little rebellion. We all know it can be a tough time. What kind of modeling do you think will eventually bring them back to the values you have spent years teaching? What kind of modeling (and memories) do you think will serve your teens for the rest of their lives?