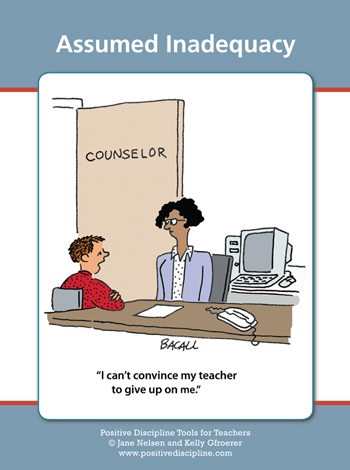 A Positive Discipline Teacher Tool Card
by Dr. Jane Nelsen and Dr. Kelly Gfroerer
The student who operates from the mistaken goal of assumed inadequacy (because of a mistaken belief about her capabilities) may not cause you many problems during the day, but may haunt you at night when you have time to think about how she seems to have given up. Unlike the student who says, "I can’t," just to get you to pay attention, the child operating from assumed inadequacy really believes she can’t.
With increased awareness about the mistaken belief, you might say to the student operating form undue attention, "I have faith in you to figure it out." However, for the student operating from the mistaken belief and goal of assumed inadequacy, you need to take time to show her a small step. Don’t do all the steps. Having too much done for her could be what gave her the impression that she is inadequate. An example is to say, "I’ll draw one half of the circle, and you can draw the other half," or, “I will do the first two steps of this algebra problem, and then you can do the next two.”
Why is it important to identify the mistaken goal? It is helpful to know the mistaken goal (and belief) so that you can know the most effective action you can take to create a connection and use encouragement to help students achieve their true goal of belonging and significance.
Identifying the belief behind the behavior and the mistaken goal is not always easy, because a child may use the same behavior to achieve any of the four mistaken goals. For example, a student may refuse to do his homework in order to gain attention ("Look at me, look at me."), to show power ("You can’t make me."), to seek revenge ("It hurts that my grades are more important to you than I am, so I will hurt you back."), or to express his sense of inadequacy ("I really can’t"). Understanding the goal is important because effective intervention and encouragement will be different for each goal.
Note the word encouragement. This is very important since a "misbehaving child" is a discouraged child. The discouragement comes from beliefs and feelings of not belonging or not having significance. It does not matter whether the beliefs are based on facts or the student’s perception of the situation. Behavior is based on what the student thinks is true, not what is true.

Sonja Sutcliffe, a teacher at the British International School of Jeddah in Saudi Arabia used the Mistaken Goal Detective form to discover how to encourage a student with the Mistaken Goal of Assumed Inadequacy.
Below are questions included in this activity and Sonja’s responses which helped her gain insights:
Think of a challenge you are having with a child (or spouse, friend, or co-worker). Write it down, including the child’s age:
Age of child 11- Child constantly saying they can’t do something I am dumb etc
What are you feeling?
Hopeless and in despair.
What do you do in response to the challenging behavior? Does it come close to any of the descriptions in the third column of the Mistaken Goal Chart?
Sometimes I have resorted to over helping.
What does the child (or other person) do in response to what you do? Does it come close to any of the descriptions in the fourth column of the Mistaken Goal Chart?
For sure the behavior does not change or little sign of improvement.
Based on the information you have written so far, what is the mistaken goal of your child (or the other person) as indicated in the first column?
Assumed Inadequacy.
What is the mistaken belief? (fifth column) I don’t believe I can belong, so I’ll convince others not to expect anything of me. I am helpless and unable:
It’s no use trying because I won’t do it right.
Write down the coded message that lets you know what your child (or other person) needs to feel encouraged (sixth column).
Don’t give up on me, show me a small step.
Now find something you would like to try (from the seventh column) the next time you encounter the challenging behavior. Try it out.  Then write about what you tried and what happened?
I chose two things:
1) to set up opportunities for success and,
2) take time to train. I also built on his interests. By using his interests of nature and animals I was able to set up the opportunity for shared reading in a positive environment. This resulted in more reading, willingly, and the start of developing more self-confidence when reading for expression. Prior to this was ‘I can’t. I am rubbish at reading.’ Now he enjoys a sense of belonging and capability and keeps improving daily.

1. The following examples are encouraging ways to use the coded message to help change the child’s belief and behavior:
2. Sometimes it is best to forget about academic achievement until a student feels a strong sense of belonging and significance.

as a parent coach and teachers' trainer, I find this tool very effective and helpful. helping children at home or at school with their self- concept and self-actualization is the only way for proper intrinsic motivation.