Excerpt from Positive Discipline in the Classroom by Jane Nelsen, Lynn Lott, and H. Stephen Glenn

Many difficult problems seem easier to solve when choices are presented as solutions. As the teacher, you can help your students succeed by offering an appropriate choice between at least two acceptable solutions. The key words here are appropriate and acceptable.

Many times a choice is not appropriate. For instance, it is not appropriate to give students a choice as to whether they want to learn to read, go to school, hurt someone else, be in a dangerous situation such as climbing on the roof, and so on. Other choices are appropriate but limited, such as “You may read this book or this other book.” or "You can do your homework during free time or at home.” “What would help you most right now—to use the Four Problem-Solving Steps or the Wheel of Choice?”

It is not appropriate to give broad choices to younger students, such as “Where do you want to sit?” or “What do you want to learn?” Younger students need more limited choices, such as “You may sit at this table or that table” or “We can do our art assignment first or our math assignment. Which do you prefer?” With older students, you can give much broader choices because their skills at making decisions and dealing with consequences are usually more developed. With young students, you might ask “Would you like to write a report on a butterfly or a turtle?” With older students you could give a choice such as “Would you like one week or two weeks to get your report done? You pick the topic.”

A choice is acceptable when you are willing to accept either option that the student chooses. Don’t offer a choice that is not acceptable to you. When you do offer a choice, if the student picks something completely different, say, “That was not one of the choices. Try again.” 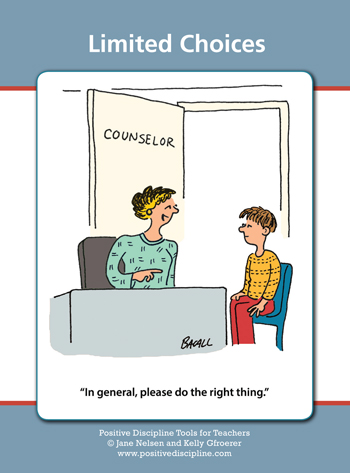 In my kindergarten class, Owen, a new student to the school, consistently avoided doing his work, especially during the morning language arts block. As a new student, Owen had struggled with the transition. He often had difficulty managing his emotions and demonstrated low frustration tolerance. In daily class meetings Owen avoided giving his classmates compliments. And when problem-solving he often sought solutions that solely benefited him.

Conversations with Owen’s parents helped me better understand Owen. Owen’s parents shared that Owen was an only child and that they both worked very long hours and traveled. Owen’s parents openly admitted that when they were with him, they avoided conflict because they had so little time together as a family. Owen’s avoidance of doing hard tasks in the classroom made sense in the context of his family and home life.

The first time I used limited choices with Owen, he had some trouble managing his feelings, but it worked like a charm. I gave the class directions to write about their favorite “Super Kids” character so far this school year. Owen did not start working, but instead fiddled with the supplies in his pencil box. I then went to Owen, bent down, and said, “Owen, you can write about your favorite character now or with me at ten o’clock. It’s up to you.”

Owen knew the daily schedule and that recess was at ten o’clock. At first Owen protested, “I don’t want to miss recess. I don’t know what to write.”

He started to cry, but then wiped his tears and started to work. When the students were out to recess, I opened Owen’s journal and read what he had written: “It is hard for me to pick my favorite Super Kid. All the kids are so nice. I like them all. It is like my new school. Everyone is nice and my friend.”

As I read the entry in Owen’s journal, I knew we were making progress. He had decided to do his work and earn the privilege of going to recess. More importantly, he had chosen to share how he felt about his new school and new friends.