The Importance of Connection

"You have to reach the heart before you can reach the head." I first heard this statement while reading an article about Carter Bayton in a September, 1991 issue of Life Magazine. Carter Bayton was asked to work with thirteen 2nd grade boys who were considered so disruptive that they couldn't make in it a "regular" classroom. After six months of working with these boys they were doing so well that they challenged the "regular" class to a math contest and won. Carter found many ways to be effective with his students, but said the foundation was to reach their hearts before he could reach their minds. 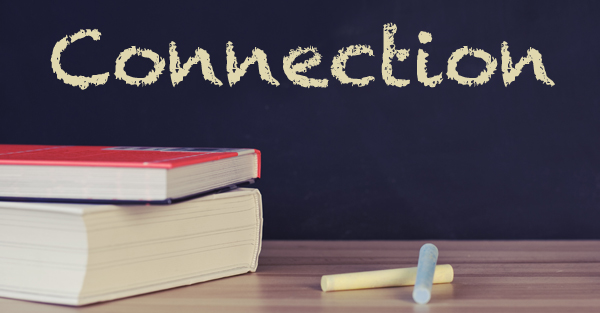 Connection matters! Adolescents do better when they perceive caring (connection) from either their home or school. The National Longitudinal Study on Adolescent Health, which surveyed 90,000 teens showed (even controlling for income, race, and parental status) that students who report feeling connected to a parent or the school have less emotional distress, fewer suicidal thoughts, use less cigarettes, alcohol and marijuana, have less violent behavior and have a later debut of sexual activity.

The list could go on and on. All of these suggestions help create a connection. When children feel connected they are more open to kind and firm correction —especially when they are involved in creating a solution that is respectful to everyone.

Mr. Nelson invited Todd to stay after school. Todd was expecting the usual lectures. Instead, Mr. Nelson said, "Todd, I've noticed that you often get very angry and lose your temper."

Todd gave him a defiant look and said, "So."

Mr. Nelson said in a friendly manner, "Have you ever noticed what happens in your body when you are angry?"

Todd snuck a glance with a look of surprise on his face.

Mr. Nelson continued, "I've noticed that I can feel my anger in my neck and shoulders if I'm paying attention."

Todd still gave him a look that indicated, "So."

Mr. Nelson asked, "Would you be willing to notice what you feel in your body the next time you get angry."

Mr. Nelson said, "Thanks for being willing to come see me, Todd."

This scene may look like nothing happened, but that isn't true. Mr. Nelson made a connection with Todd. The proof is in what happened next. Todd didn't have a temper tantrum for four days. So let's look at the scene again and dig beneath what it seems. Many things are very different. Mr. Nelson did not lecture or punish. He was kind when he got into Todd's world by voicing what may be going on with Todd. (A connection is made when kids feel understood.)

Mr. Nelson then shared something of himself—how he sometimes felt angry too. (Connection) He then invited Todd to notice what happened to him the next time he got angry. He didn't force the issue and didn't ask for a commitment —just made a suggestion and allowed time for the connection to percolate.

Now let's go to scene two: Todd had another temper tantrum in the classroom. Mr. Nelson went to him and whispered, "Todd, did you notice what happened in your body? Come see me after school and tell me about it." (Connection)

Todd was so surprised that he settled down. When he went to see Mr. Nelson after school, he told him that he felt his fists clench when he was losing his temper; and he felt like hitting something (which he usually did).

Mr. Nelson had created a close enough connection that he could engage Todd in the last step for winning cooperation —brainstorming for solutions.

Mr. Nelson asked, "Todd, the next time you feel your fists clenching, can you think of something that would help you calm down?"

Of course he didn't know. Todd had spent his life in a vicious cycle of losing his temper, being punished, losing his temper, being punished. His method of operation was to get defensive and rebellious. How would he know anything else? Mr. Nelson knew it was time to teach brainstorming for solutions. He said, "How about if we brainstorm together until we find a solution that would work for you? One idea would be to count to 10."

Mr. Nelsen then said, "Another possibility would be to take deep breaths. Can you think of anything else?"

Todd said, "I could just leave the classroom for awhile."

Mr. Nelsen wrote it down. Then he asked, "Which of these suggestions would work for you?"

Todd said, "I would like to leave the classroom."

Mr. Nelson said, "That sounds like a good idea. However, school rules wouldn't allow you to just roam around. Would it work for you to leave and stand outside the classroom door until you are ready to come back in?"

Mr. Nelson said, "I have faith in you to handle this. You don't even need to let me know when you need to leave."

Mr. Nelson reported that it was another six days before he saw Todd walk out of the classroom and stand outside the door. When he came back in Mr. Nelson gave him a wink and thumbs up. Todd smiled. (Connection)

According to Mr. Nelson, Todd did not become perfect. He still lost his temper once in awhile and forgot to step outside the classroom. However, as Mr. Nelson put it, "He used to have several temper tantrums a day. Now he has one or two a month. I'll take it."

Where did we ever get the crazy idea that in order to get children to do better, first we have to make them feel worse? When we stop to think about this statement, it really doesn't make sense, yet it seems so difficult to change the minds of some parents and teachers who hang on to the idea that the only way to change behavior is through punishment (which is often poorly disguised by calling it logical consequences).

Instead create a connection and then get children involved in respectful correction that leaves everyone feeling encouraged, confident, and capable.