by Kelly Gfroerer and Jane Nelsen

The root of education is educare—to draw forth.

1. Children will listen to you AFTER they feel listened to.

3. Stop “telling” and “ask” curiosity questions (using your own words) such as: 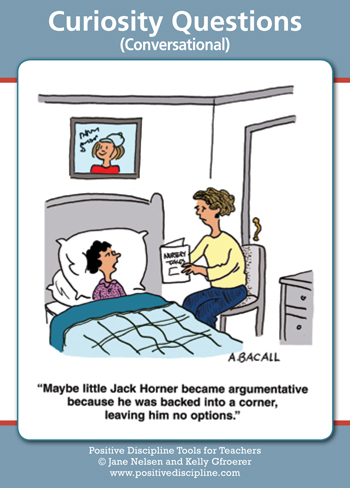 One of the most important skills that both models mutual respect and allows children to develop their perceptions of personal capability is open-ended questioning. This Positive Discipline Tool, Curiosity Questions, also helps develop “social feeling” because the child feels respectfully included.

Asking questions with genuine curiosity can change an atmosphere from negative to positive. Below is an example.

A teacher requested a counselor to help with Stephen, a student who was causing a great deal of trouble on the playground. The counselor felt the best way to handle the problem was through a class meeting. This teacher had never held a class meeting, so the counselor used this opportunity to demonstrate.

She asked Stephen to leave the classroom go to the library. The general rule is that you do not discuss a child who is not there, but in this case she knew that a positive atmosphere had not been created and she did not want to take the chance that Stephen would be hurt by the comments. The class meeting was started by asking who the biggest troublemaker in the class was. The students all chorused, "Stephen." They were then asked what kind of things Stephen did to cause trouble. They mentioned fighting, stealing balls, swearing, calling names, and so on. These first questions allow the children to express what they have been thinking and feeling.

The next questions allowed the children an opportunity to think more deeply. "Why do you think Stephen does these things?" The answers included such things as "Because he is mean." "He is a bully." Finally one student said, "Maybe it is because he doesn’t have any friends." Another student chimed in with the information that Stephen was a foster child.

When the children were asked to discuss what it means to be a foster child, they offered such ideas as how hard it must be to leave your family, move so much, and so forth. They were now expressing understanding for Stephen, instead of hostility.

When asked, "How many of you would be willing to help Stephen?" every student in the class raised his or her hand. A list was made on the board of all their suggestions of what they could do to help. These included walking to and from school with Stephen, playing with him during recess, walking to school with him, eating lunch with him and about 10 other ideas. Specific volunteers were then listed after each suggestion.

When the whole class decided to help Stephen, and followed through on their commitments, he felt such a sense of belonging that his behavior improved dramatically.

I notice that the original 4 questions have been changed:  I like the new 4 questions better.

Question 3 has been challenging because children's brains take time to develop cause-and-effect thinking, and often they will answer "I don't know" when asked "What do you think caused this to happen?"