Decide What You Will Do 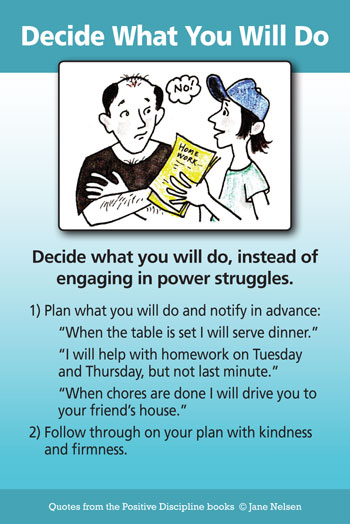 The Jones family is very excited. They have just finished planning a day at the beach. Seven-year-old Jason and five-year-old Jenny have promised that they won’t fight. Mr. Jones, has warned, “If you do, we’ll turn around and come back.” “We won’t, we won’t,” promise Jason and Jenny again.

The Jones family haven’t gone two miles when a loud wail is heard from the back seat, “Jason hit me.”

Mrs. Jones says, “What did we tell you kids about fighting?”

Jason defends himself, “Well, she touched me.”

Mr. Jones threatens, “You two had better cut it out, or we are going home.”

The children cry out it unison, “Nooooooo! We’ll be good.”

And they are — for about ten minutes. Then, another wail is heard, “He took my red crayon.”

Jason replies, “Well she was hogging it. It’s my turn.”

Mr. Jones says, “Do you want me to turn around and go home?”

And so the story goes. Throughout the day Jason and Jenny fight, and Mr. and Mrs. Jones make threats. At the end of the day, Mr. and Mrs. Jones are angry and threaten never to take the kids anywhere again. Jason and Jenny feel bad that they have made their parents so miserable.  They are beginning to believe they really are bad kids—and they keep living up to their reputation.

Now let’s visit the Smith family. They have just planned their trip to the zoo during their weekly family meeting. Part of the planning included a discussion about limits and solutions.  Mr. and Mrs. Smith have told Susan and Sam how miserable they feel when they fight. The kids promise they won’t. Mr. Smith said, “I appreciate that, and I think we should come up with a plan for what will happen if you forget.” The kids keep insisting they won’t fight. Mr. and Mrs. Smith know their children have good intentions, and they are also very familiar with the pattern of good intentions gone awry. So, they have decided what they will do and they will follow through.

Mrs. Smith says, “Well then, is it okay with you if we stop the car if you do forget? We don’t think it is safe to drive when you are fighting, so we’ll just pull over to the side of the road and wait for you to stop. You can let us know when you are ready for us to drive again. How do you feel about that solution?” Both kids agree with innocent enthusiasm.

Typically, it doesn’t take them long to forget their promise, and a fight begins. Mrs. Smith quickly and quietly pulls off to the side of the road. She and Mr. Smith take out magazines and start reading. Each child starts blaming the other while protesting his or her own innocence. Mr. and Mrs. Jones ignore them and just keep reading. It doesn’t take long for Susan to catch on that Mom and Dad must mean what they said. Susan says, “Okay, we are ready to keep driving.” Mr. Smith says, “We’ll wait until we hear it from both of you.” Sam says, “But, she hit me.”

Mom and Dad just keep reading.  Susan hits Sam, “Tell them you are ready.” Sam cries, “She hit me again.” Mom and Dad just keep reading. Susan realizes that hitting Sam won’t help, so she tries to reason with him. “We’ll have to sit here forever if you don’t say you are ready.” Susan follows her parent’s lead and starts to color. Sam holds out for about three more minutes before saying, “I’m ready for you to start driving.” Mom says, “Thank you very much. I appreciate your cooperation.”

About 30 minutes later another fight starts. Mom starts to pull over to the side of the road. Both kids cry out in unison, “We’ll stop. We’re ready to keep driving.” There was no more fighting for the rest of the day, and the Smiths enjoyed a wonderful day at the zoo.

What is the difference between the Jones family and the Smith family? Are Jason and Jenny really “bad” kids?” No, the difference is that the Smith family is helping their children learn cooperation and problem solving skills while the Jones family is helping their children learn manipulation skills. Mr. and Mrs. Smith demonstrate that they say what they mean and mean what they say by using kind and firm follow through. Mr. and Mrs. Jones don’t. They used angry threats. This had a temporary effect, but the kids would soon be fighting again.

Mr. and Mrs. Smith stopped using words and instead followed through with kind and firm action. It took a little longer for the kids to catch on, but once they did it had a longer lasting effect. Because they are kids, they just had to test the waters one more time. When their parents started to follow through again the kids knew they meant what they said. They were left with the feeling, not that they were bad kids, but that they were clever enough to figure out a solution to the problem and that cooperation was the most effective alternative.