Teen Getting Poor Grades & Being Suspended

I attended your lecture on Positive Discipline held at Mira Costa on the 21st, because I really need help on where to go from here. I have an almost 13 year old boy who is testing his limits (and mine). What would be the best approach for me in the following instances:

He was getting poor grades in two of his classes so I said until the grades are back up to an acceptable grade he was grounded from everything! Obviously this was before your lecture. Just as he gets A's on the next two tests (after just one week) he gets a detention at school for spitting a spit wad. Now I am really showing my disappointment, but let him have his life back. The following week he gets another detention for misusing the computers in the library. At this point he just knows how disappointed his father and I are. That same night he is at a friend's and the four friends get into mischief by damaging the neighbors property. On all the occasions he said he did things even though he knew they were wrong but he didn't want his friends to think he was weak and didn't want to be seen as NOT COOL. How should I handle this kind of stuff? Please help. Beth

Hi Beth, Your questions remind me of why I wrote Positive Discipline for Teenagers with Lynn Lott. I was having similar problems and was at my wits end. It took us two years to write that book because I had to get past my fears and test the methods to see if they would work. They do – even though I was never able to be perfect about applying them all the time. Let me see if I can condense a whole book (ha ha) to answer your question. I hardly know where to start – which concepts to share and which to leave out.

I'll start with discouragement. As we say in all of our books, "A misbehaving child is a discouraged child." When children are discouraged, they choose one of the "four mistaken goals of behavior" — mistaken because their real goal is to belong (feel connected) and they mistakenly try one of the following in a mistaken effort of what it takes to belong, or to handle the disappointment of not belonging.

I will point out that it doesn't matter if you think he belongs; his behavior is based on what he thinks. So, the first question I would ask is what is your son discouraged about, and what mistaken goal is he choosing to deal with that discouragement? I'll make some guesses. It sounds as though he feels discouraged about:

2. Disappointing you. (It really hurts to feel that you are a disappointment to your parents.)

3. His worthiness to be accepted by his friends.

I'm sure there is a lot more on his plate — as there is on the plates of all teenagers as they go through the huge individuation process of trying to figure out who they are — separate from their values.

As you look at what he is discouraged about you might wonder, "If he doesn't want to get poor grades, why doesn't he study? If he doesn't want to disappoint me, why doesn't he do what I ask him to do? And, why can't he just be himself and to heck with anyone who doesn't like him?" Sounds logical, but human beings aren't logical when they are discouraged. (It sounds as though you are discouraged and are doing some illogical things yourself. If you were him, would you feel encouraged by the things you are doing to him?) I say that in the spirit of awareness — not blame. Both of you mean well, but obviously aren't getting the results you would like. 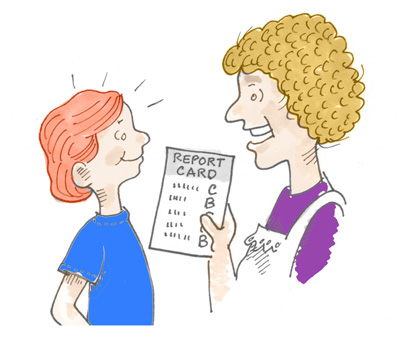 I don't have the time or space to talk more about the four mistaken goals, and how your feelings help you "decode" what his behavior is all about. (We have whole chapters on this in all of the Positive Discipline books.) I will offer some suggestions and hope they make sense without more background. All of them are designed to provide encouragement because of my knowledge that children do better when they feel better. Choose one or two that fits for you — or do them all at different times.

There are many other points to make — such as the perception that what I'm advising sometimes looks like permissiveness. I'm as much against permissiveness as I'm against punishment. Positive Discipline is about kindness and firmness at the same time. There are many kind and firm things you can do AFTER you establish a base of encouragement. I hope you can see that what you have been doing (and what I was doing before I learned better) is to create a cycle of discouragement. I urge you to try nothing but encouragement for two weeks and see for yourself how magical it can be.

My best to you,

I promise I won't make this a habit - of writing to you sooo often. I wanted to let you know how timely your answer came to me. I just finished reading your suggestions, when my son asked if he could go to Knott's Berry Farm today. It is a holiday from school, and a parent was going to drop five kids off and pick up later this evening. My first reaction was to say NO I can't trust you yet, you need to earn the this privilege back. Well, after reading your suggestions I said, "Well, you know, I feel very good about letting you go with your friends. After our recent discussions I know you will make very wise choices, so go and have a great time. Would you call me later to let me know when you are returning so I have an idea when to expect you?" He was so surprised and I actually saw a twinkle in his eye. I have tears as I am telling you this. I feel great and I know he does also. THANK YOU for your sharing your wisdom and thank you for the perfect timing of your e-mail. He just called to say he was having a blast (something he NEVER would have done in the past)!

Hopefully I won't be e-mailing you for a long time now,