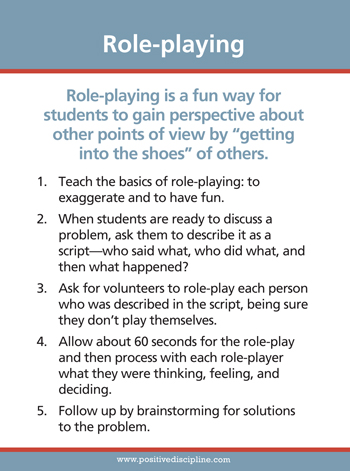 Role-playing is a fun and engaging way for students to learn and practice important life skills. Evidence-based studies identify the importance of integrated daily practice of social and emotional learning and specifically cite role-plays as an important participatory element. “Role play is an important program feature and suggested as a best practice for SEL intervention.” (Durklak et al, 2011).

Below is an example of how you can use Role-playing when you teach your students the Four Steps for Problem Solving.

The Four Steps are:

2. Talk it over respectfully.

3. Agree together on a solution.

4. Ask for help if you can’t work it out together.

Many wonder why “Ignore it” is a problem-solving step. How do you solve a problem if you just ignore it?

Well, how often do we make a big deal out of something so minor that it would fade away if ignored? You can have students role-play the following two scenarios to learn that ignoring can be one of many solutions.

SCENARIO ONE: Two students, who have been coached to play their roles by exaggerating while making sure no one gets hurt, are walking down the hall in opposite directions. The first student accidentally bumps into the second student, who shoves back. The first student, in turn, shoves the second student. Stop the role-play when the point has been made—usually after ten to fifteen seconds.

Process the role-play by asking what each student is thinking, feeling, and deciding to do. Then invite all the other students to share what they learned from watching this role-play.

SCENARIO TWO: The same two students are walking down the hall in opposite directions. The first student accidentally bumps into the second student. The second student keeps walking.

Process the role-play by asking what each student is thinking, feeling, and deciding to do. Then invite all the other students to share what they learned from watching this role-play.

Follow this role-play by inviting the students to create other scenarios for what the two students could do instead of fighting or ignoring. They might come up with some creative variations, such as apologizing, laughing, or turning to give each other a high five. Whatever they come up with, invite students to role-play the new scenarios.

Introduce the other three problem-solving steps to your students. Facilitate a discussion of each of the steps to help students gain a better understanding of what they mean. For example, the step “Ignore it” might involve taking some Positive Time-Out to calm down before coming back to follow the other steps.

The second step, “Talking it over respectfully,” might involve sharing “I” messages and listening to the other person’s point of view. It might mean each person taking responsibility for how he or she contributed to the problem, and sharing what each is willing to do differently.

The third step, “Agreeing together on a solution,” might require a brainstorming session to first create a list of possibilities.

The fourth step, “Asking for help,” could mean putting the problem on the class meeting agenda to get the whole class involved in brainstorming for solutions, or asking an adult for help.

Divide them into three groups and ask them to first discuss each step, and then to create a role-play to demonstrate each one. They can decide who will play each role, being sure to include the important roles of observing students who are all affected by what goes on.

It won’t be long before you will catch your students practicing the art of finding solutions without any interference from you.