At what age can children participate in class meetings?

I do class meetings every morning with my little preschool group (made up entirely of 3.5 yr olds), and it's really a class meeting/circle time hybrid.  Every morning one of the children is the "meeting leader" and starts off our good morning song (in the two languages of their choice).  Then they check the weather and give a report.  Next we give compliments and appreciations (they are so fabulous at this, gives me goose bumps... we learned this by sharing something we had done ourselves that we felt good about, then noticing things that our friends had done that we felt good about and appreciating it).  Then we either play a game based on one of the PD student activities, simplified and made developmentally appropriate (ie., cooperative ball rolling, bugs & wishes, feeling faces, etc.) or we do "doggy problem solving", where our stuffed dogs have a problem that I act out (one that either I have observed or the children bring up to me) and the children help them.  I used to do this with puppets, but this group has such an attachment to these toy dogs, so that's what we use now.  We end with a book, chosen by the meeting leader.  It typically takes about 25 minutes, which can be a long time for some groups in my experience, but this little group has been known to draw it out even longer with extra songs and stories and games.  It's fun and exciting, and yes, they do get it!  I love hearing them later make connection after connection, and hearing that they bring these things home to their families, and the practice is adopted at home, too.  Very cool indeed.  I'm currently phasing out my family home daycare and moving in a new professional direction, and I have to say that our class meetings are one of the things I will miss the most.
Eryn Rodger, Certified Positive Discipline Associate, Santa Cruz, CA

I directed an Adlerian private school in Bloomington, IL where we enrolled children from 3-years-old to 8th grade. Our ‘early learners’ all did regular class meetings. Most did then once weekly, and in the early program they mostly focused on compliments. When there was a problem they needed to discuss, the teachers of 3’s and 4’s led the conversation, but as the children grew in their maturity and ability to articulate, they took more leadership around the topics and the solutions.  We typically didn’t begin using an agenda until children were in kindergarten, which for us, was late 4’s through early 6’s depending on the child.
I began at that school as a kindergarten teacher, and I started in January so the children were already well practiced in class meetings and they trained me. I’ll never forget the feeling of utter equality as I sat on my 5-year-old sized chair and participated in the meetings without a real clue how it would work. A student was the leader and just handled the whole thing! I remember looking at the agenda in kindergarten and often the only thing I could read were the names. They would draw pictures of their problem or best guess spell it. Often we would pass the agenda to the person with the problem so they could read what they had written.  It didn’t faze them a bit that they couldn’t spell yet, or barely write for that matter. It was pretty cool.
I strongly believe that this is the time to start with kids.  When they begin to practice this kind of community at such a young age, problem solving is not a big deal. It’s just part of being a community in a classroom, or family, or life. They get it.
Dina Emser, Life Coach and Certified Positive Discipline Associate, Eureka, IL 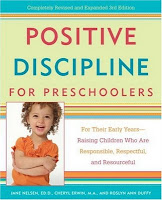 Following is an excerpt from Positive Discipline for Preschoolers, Chapter 16 on Class Meetings for Preschoolers, by Jane Nelsen, Cheryl Erwin, and Roslyn Duffy
It is class meeting time at the ABC Preschool. As the youngsters settle into a circle, Mr. Scott, the teacher, consults the agenda. “It sounds like we’ve had a problem on the playground with people throwing wood chips at one another. Does anyone have something to say about this problem, or can someone offer a suggestion of how we might solve it?”
Five-year-old Girard raises his hand. “Whoever throws wood chips could take a cool-off!” Four-year-old Natalie waves her hand, and when called upon, offers, “We could not have wood chips anymore and have grass instead.”
The teacher looks toward three-year-old Cristina, whose little hand has been patiently held aloft, and calls on her. “Guess what?” Cristina says with a bright smile.
“What, Cristina?” Mr. Scott asks.
“I had bananas in my cereal today.”
“Mmmm, that must have tasted good.” Mr. Scott smiles and thanks Cristina for her comment, then asks for more suggestions about the wood chip problem. Although Cristina clearly is not thinking about wood chips, she is still a valued member of the group.
When children are old enough to participate actively in group or circle time activities (usually around the age of two and a half ), they are ready for class meetings. Class meetings are a wonderful way to help children learn cooperation, contribution, and problem-solving skills. This class agreed that they wouldn’t throw woodchips anymore—a suggestion that had never worked when teachers pleaded, but was very effective when suggested by a child and agreed upon by the whole class.